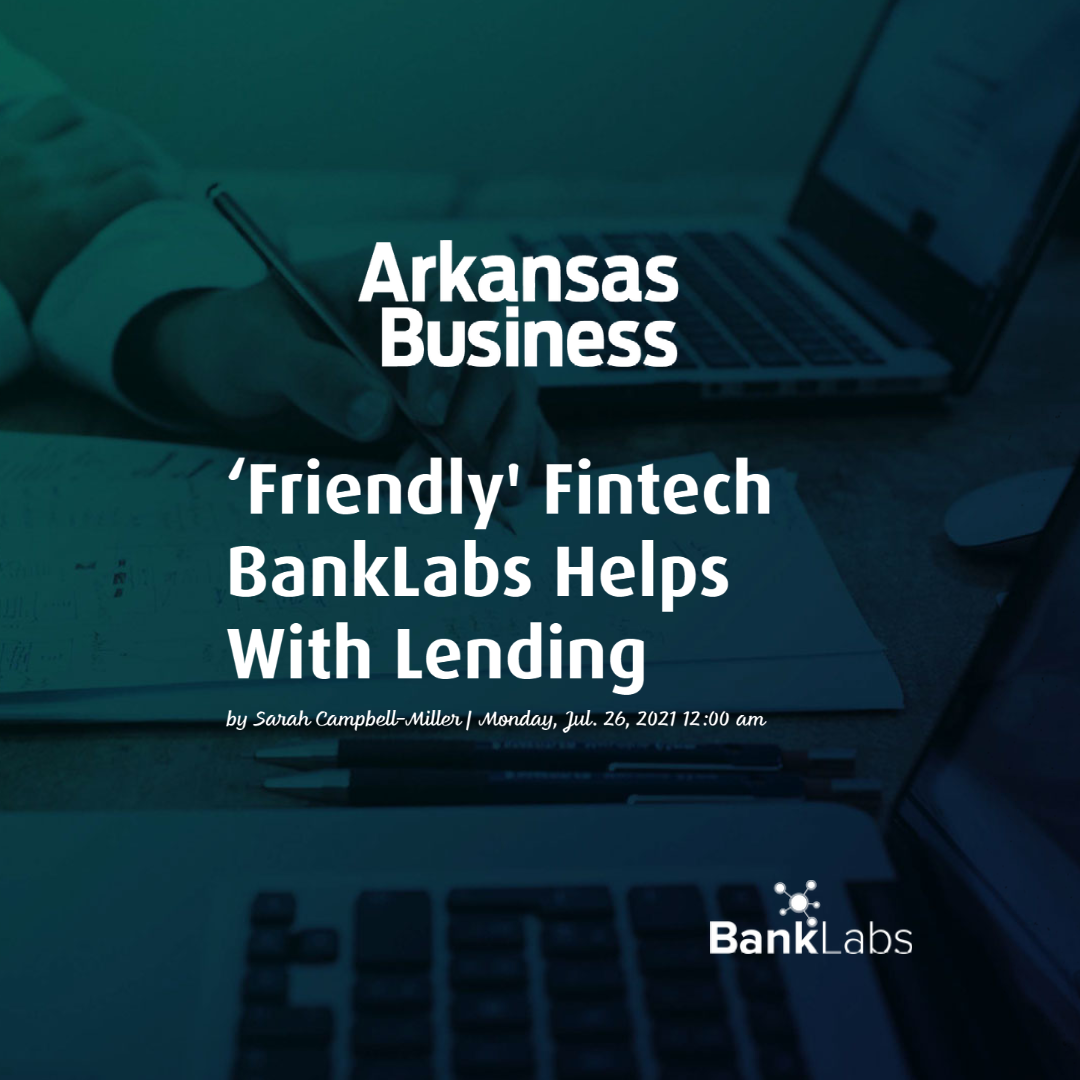 BankLabs of Little Rock will graduate from this year’s FIS Fintech Accelerator in August as it adds employees and works on a new software product designed to automate agricultural lending for banks.

BankLabs was the only Arkansas company selected from 148 applicants across 31 countries to participate in the program, which is sponsored by financial technology giant FIS of Jacksonville, Florida, and the state of Arkansas and hosted by the Venture Center of Little Rock.

“We like to call ourselves friendly fintech. The reason we use that term is we’re helping banks around the country, regardless of size, defend against the disruptive fintechs,” Matt Johnner, BankLabs president and co-founder, told Arkansas Business. “We’re the friendly fintech that helps the banks deploy additional lending solutions, including some more forward-thinking things, like allowing different companies to make loans to each other, but still benefiting the bank.”

The company was founded in 2016 and employs about 30 people. It’s hiring another 16 over the next year, he said. “We are really at a point of acceleration, or a tipping point. We’ve signed over 130 banks in the first five years. We’ve now built a great foundation,” Johnner said. “And so now it’s time to go to the next level. We’d like to double our revenue in this coming year. And then double the year after that; we just closed our first outside funding round with some great individual investors.”

He declined to disclose the company’s annual revenue, but said it raised more than the $3 million it sought from the funding round. BankLabs isn’t profitable yet. It “could be profitable in less than one year, but that would sacrifice growth,” Johnner said. He added that he was not building the company to sell it.

Johnner said BankLabs aims to be a company that has a multi-product portfolio heavily focused on commercial lending and is profitable in the long run. “We will continue to evaluate opportunities. We have had some folks try to acquire us already, and we just determined it wasn’t the right time,” he said.

For now, BankLabs has two main products, Construct and Participate. The company’s new agricultural lending product is unnamed and in the “ideation phase,” Johnner said.

Construct is software that automates construction lending for lenders to make that process — traditionally accomplished with spreadsheets and other paper documents — more profitable and efficient. The automation also reduces risk by providing real-time alerts to lenders.

Participate is software that automates lending between lenders. For example, a small bank that has a loan limit of $6 million could use it to lend $15 million to a borrower, with the additional $9 million participation coming from a partner bank, Johnner said. The software “automates the whole digital lending flow and has a marketplace component to it, to find new partners if that bank doesn’t have enough partners already,” he said.

BankLabs’s goals include signing more banks up for its products and building out the network effect of Participate. “So, if you’re a bank in Arkansas and you have, let’s say, 10 or 15 loan participations on your balance sheet, you might also have 10 unique banks that have bought one or more of those from you,” Johnner said. “And so what we do is we try to leverage that network effect, … give free access to [the] 10 downstream banks. And then we lovingly land and expand and try to upsell them.”

In addition, BankLabs touts experience in banking and technology from both Johnner and its co-founder, Chairman and CEO Mike Montgomery.

Johnner was an oilfield engineer before he joined Perot Systems Corp., which is now Dell Information Services, in 1994. After that, he worked for numerous technology companies.

Johnner said Montgomery is a third-generation banker who has invested in more than 20 community banks around the country and serves on the board of Southern Bancorp in Arkadelphia. Montgomery was also an executive at Systematics Inc., the Arkansas-based predecessor of FIS. Johnner called his partner’s past experience “fintech 1.0.”

“We’re trying to help Arkansas expand its economy and bring high-paying jobs back to Arkansas, through what we would call fintech 2.0,” he said. “This is a great time of consolidation for banks. It’s a great threat to banks that don’t innovate. So we seek out and welcome banks that are looking for digital innovation and defense against the bad guys.” 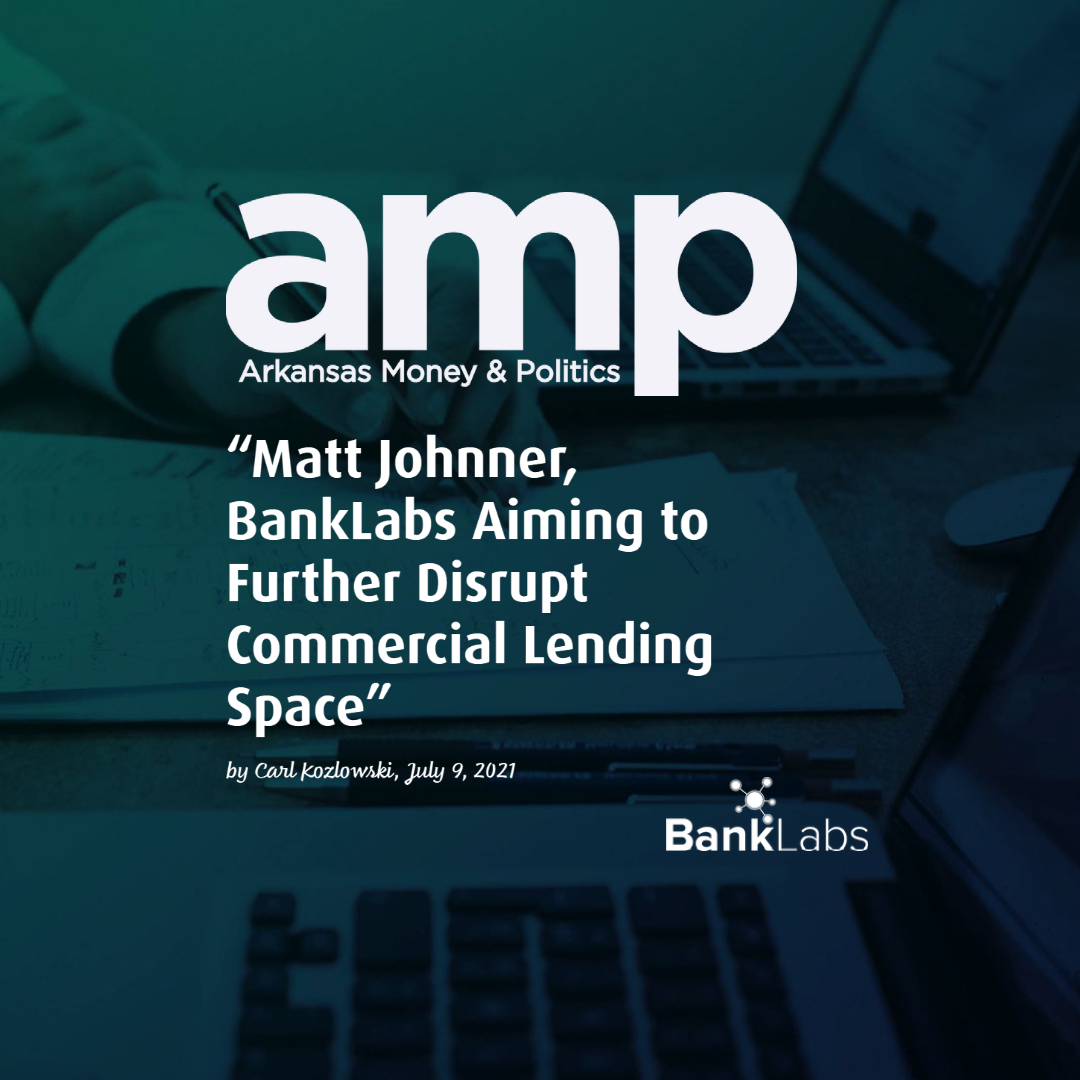 by Carl Kozlowski in Arkansas Money and Politics, July 9, 2021

Matt Johnner is no stranger to taking on challenges. He worked as a drilling fluid engineer in the oil and gas industry in such far-flung locales as Nigeria, Yemen and Dubai before entering the business world as a top-level software developer for the famous Texas billionaire H. Ross Perot at Perot Systems.

From there, the 50-year-old New York native gained a vast amount of experience by leapfrogging across several startup and small-stage companies, eventually working for Texas tech giant Morton Myerson. So, when he got the call from Mike Montgomery to join the financing company Radius Group in 2013, he jumped at the chance to start a journey that led to the founding of BankLabs in 2016, where he serves as president to this day.

BankLabs is a multi-product company that helps banks compete with “disruptive fintechs” and large international banks by automating lending. Their products help banks work on loans together when they’re too large for just one bank to handle, thus minimizing the concentration risk while replacing the inefficient, traditional process for handling loans.

The impressive results include being picked as one of just 10 companies from across the United States and 29 other countries to be part of the 2021 FIS Fintech Accelerator at The Venture Center in Little Rock. Johnner hopes participation in the accelerator will help his team grow Banklab’s Participate program.

“We started with a product called Construct, which automated construction lending, and now Participate is a balance-sheet management tool for banks used to sell off pieces of loans they already have and sell them at a premium to increase loan profit and reduce concentration risk,” he explained. “We think this can also create a whole new digital-lending channel and allow merchants to make loans to other merchants.”

Johnner posits an example in which a lumber yard has a small-to-medium size business client that buys $500,000 worth of lumber each year.

“That client needs lower financing costs than a credit card’s 21 percent. We see a day where Participate facilitates a loan between the lumber yard and a carpentry business at a much lower rate, say 5 percent,” said Johnner. “And we execute on our mission to help banks and be a friendly fintech and allow the banks in our universe or our partner’s universe like FIS to put the loans on bank balance sheets in our network.

“We see a day where the lumber yards, mills and manufacturers are getting loans from their suppliers and the suppliers are keeping loyal customers, maybe making a little bit of money on the loan, and then the loan goes on the bank’s balance sheet. It’s a version of buy now, pay later. We’ll see. Most people think we’re a little crazy, but we always think that’s a good thing.”

Builders and banks benefit from the resulting faster process that eliminated paper with electronic lien waivers and invoices, while builders got automated 1099 reporting and project accounting. Subcontractors receive same-day pay through its ACH feature, and all told, this makes +Pay and Construct the world’s first cloud-based, vertically integrated construction-funding platform.

Those innovative approaches have paid off with more than 100 bank clients such as CenterState, a $45 billion Florida-based bank; the $15 billion Plains Capital Bank based in Dallas; as well as smaller banks including the $500 million Valliance Bank in Oklahoma and north Texas. BankLabs’ work with CenterState increased its construction loan portfolio by 567 percent. Altogether, it has managed $37 billion worth of construction loans across 57,000 projects.

While Johnner is based at the firm’s offices in Dallas, it proudly counts Little Rock as its headquarters, building on the tradition of other giants including Systematics and Alltel.  The company currently has 30 employees but is looking to add 16 more staffers in the next six to nine months in the fields of software engineers, sales and customer-satisfaction specialists.

“Our goal is to differentiate the financial institutions that are not happy with the status quo from those that are resistant to change,” Johnner said. “Our clients want new ways to do things that leverage their strengths. We’re at a huge transition point and have a huge runway ahead of us and that’s only possible through great team.”

5 Charts that Summarizes Construction during 1 year of Covid-19

This month marks one year since Covid-19 changed the construction industry, and the world, forever. Boston was amount the first metro areas to issue a stop work order, others were soon to follow. This resulted in a huge dip in production for the industry. The charts show a drastic drop in not only construction employment, but demand for construction in general.

Another metric to look at is the Architectural Billing Index. You can really see the effect of Covid-19 on this metric as well. If construction employment and architectural billing plummeted, one metric that did rise was material costs. Employee absences due to illness greatly disrupted transportation and distribution of materials, making accurate estimates in the construction project realm difficult to nail down. With materials fluctuating, this caused a whole new problem for construction lenders.

The good news is, all of these metrics are beginning to return to their pre-Covid-19 levels. As talk of vaccines strengthened, contractor confidence and construction employment steadily begin to rise. While architectural billing is still not quite up to pre-pandemic numbers, it does should a steady increase of the last few months, which can only be a positive sign that the industry will be picking up. Some analysists predict that construct may greatly increase to make up for the lag of last year. 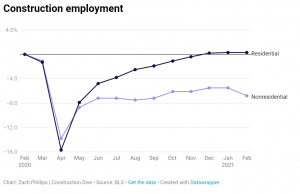 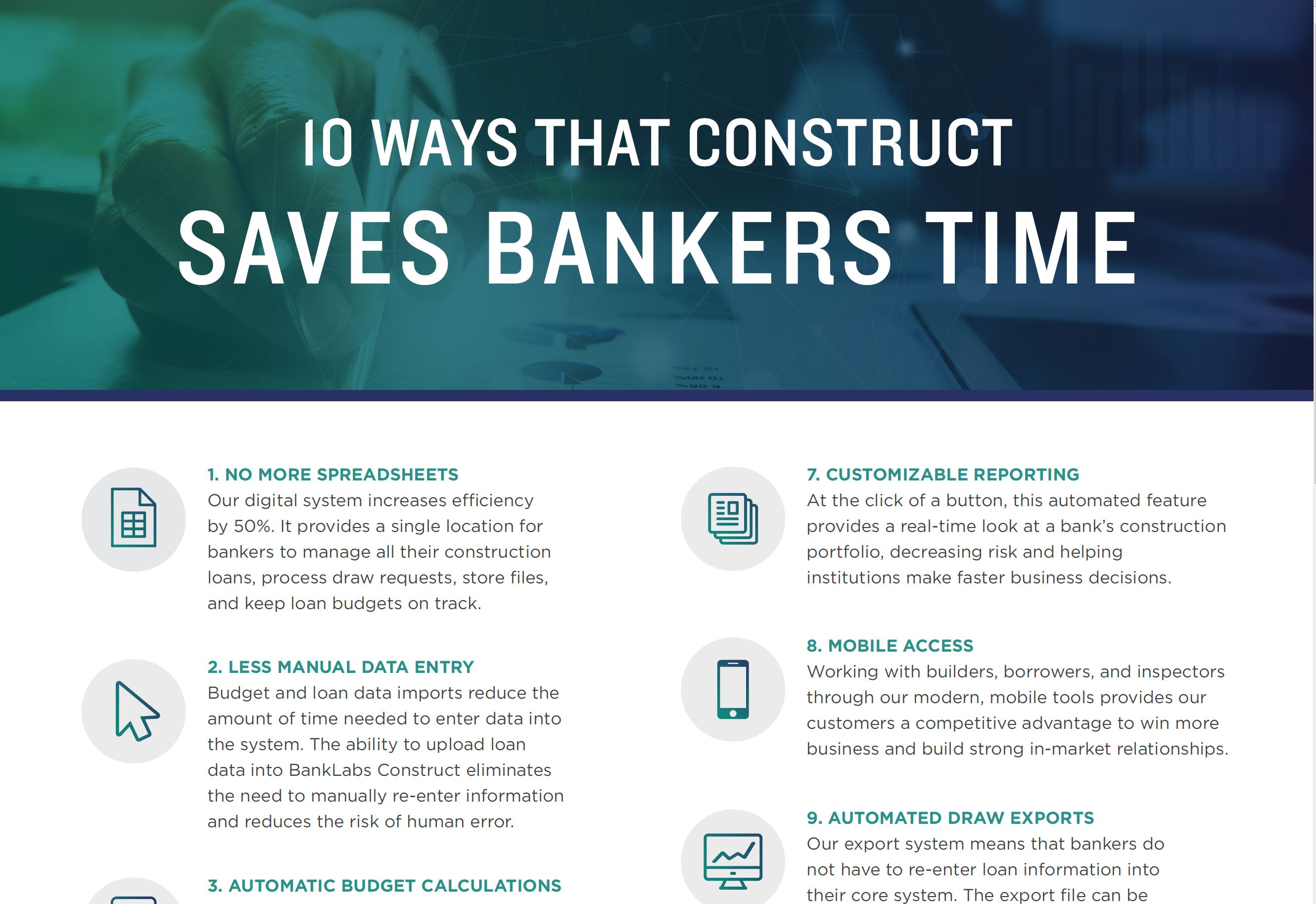 By BankLabs | Article, Uncategorized | No Comments 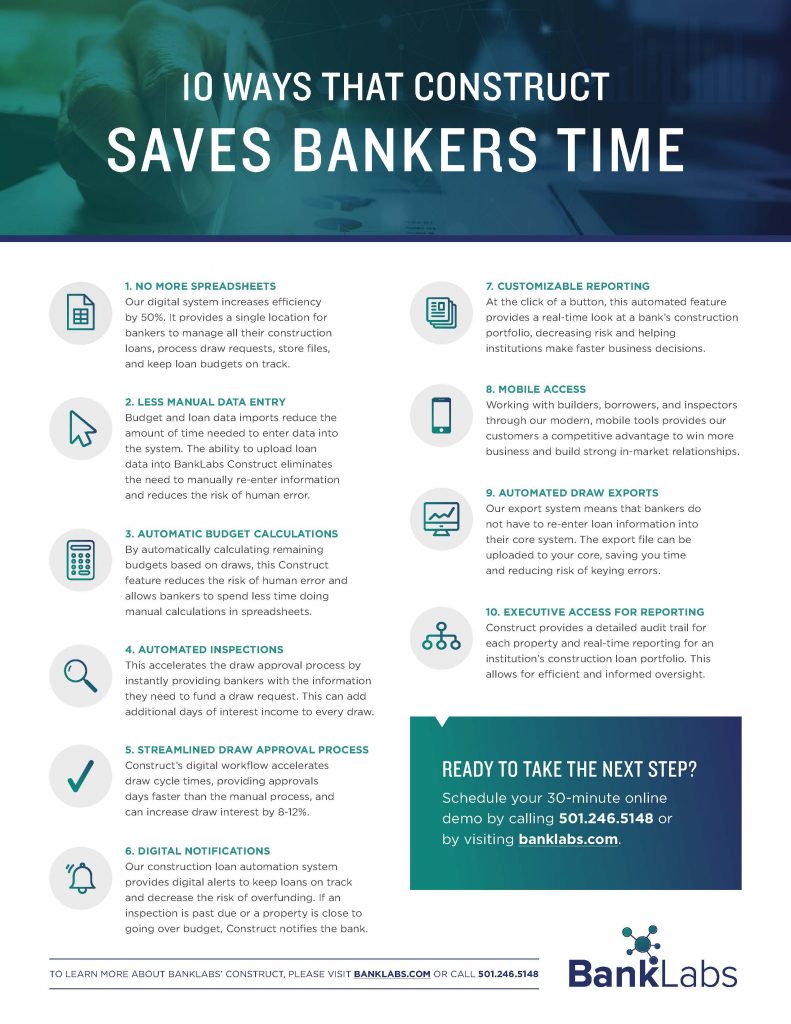 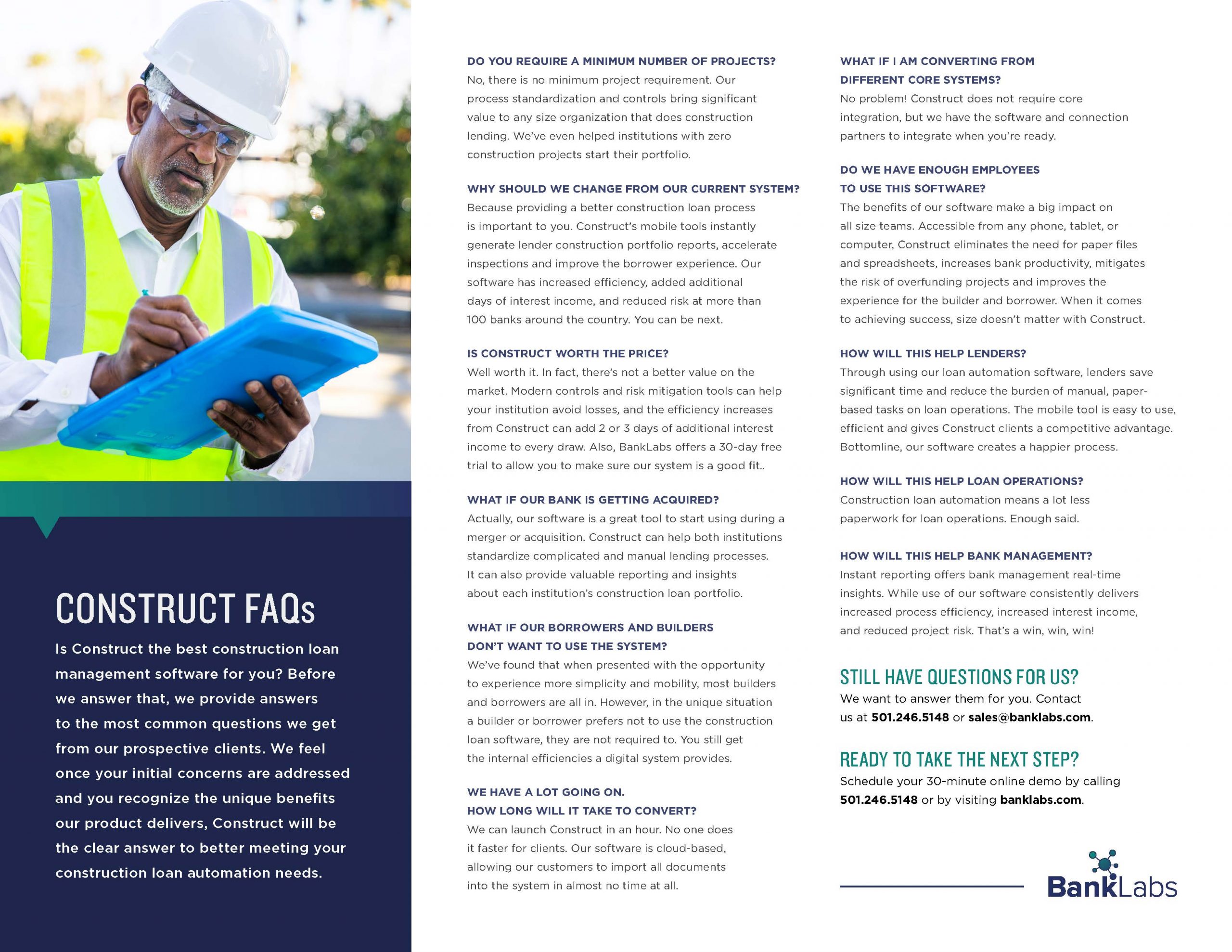 Is Construction Loan Automation Software right for you?

By Michael McMurray | Article | No Comments

IS CONSTRUCTION LOAN AUTOMATION SOFTWARE RIGHT FOR YOU?

Here are some of the most common questions asked about construction loan software. See if Construct is right for you and your financial institution. 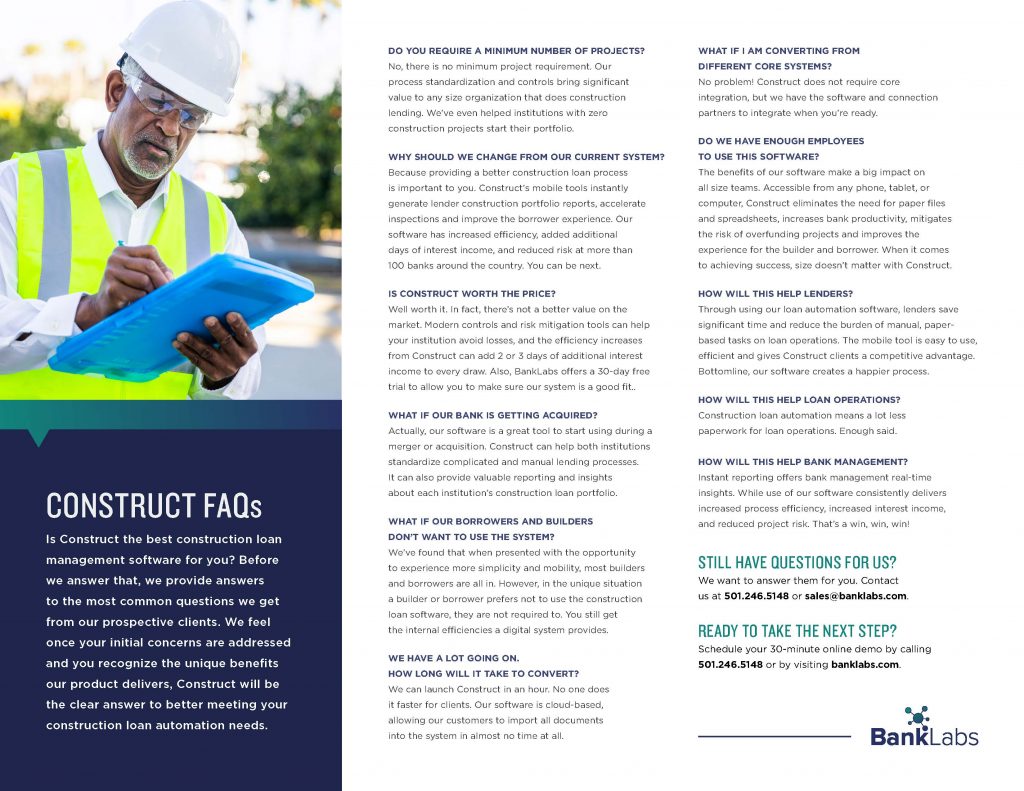 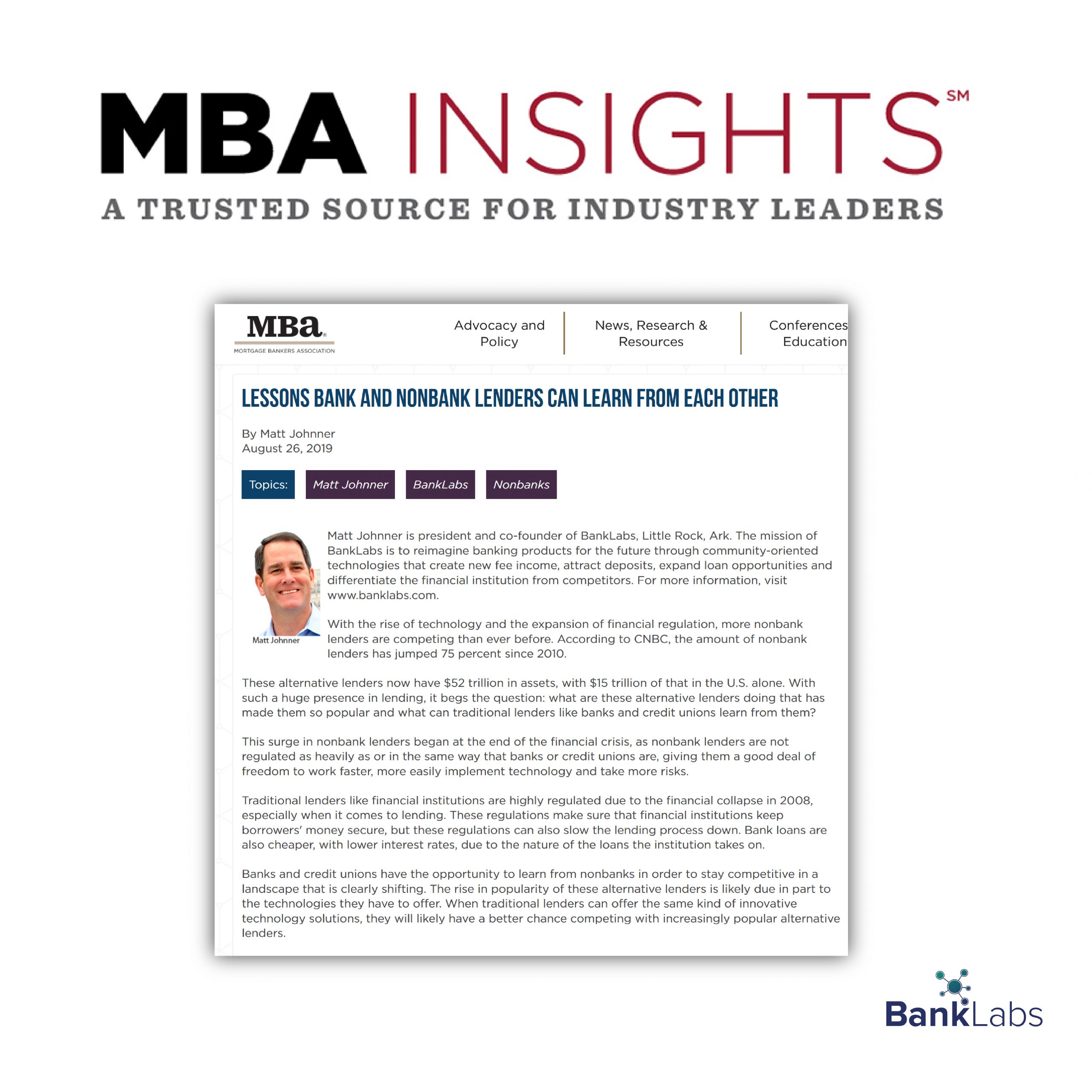 With the rise of technology and the expansion of financial regulation, more nonbank lenders are competing than ever before. What can traditional FIs learn from them and what can they do to compete? Check out MBA Insights to find out: https://www.mba.org/publications/insights/articles/featured-article/lessons-bank-and-nonbank-lenders-can-learn-from-each-other 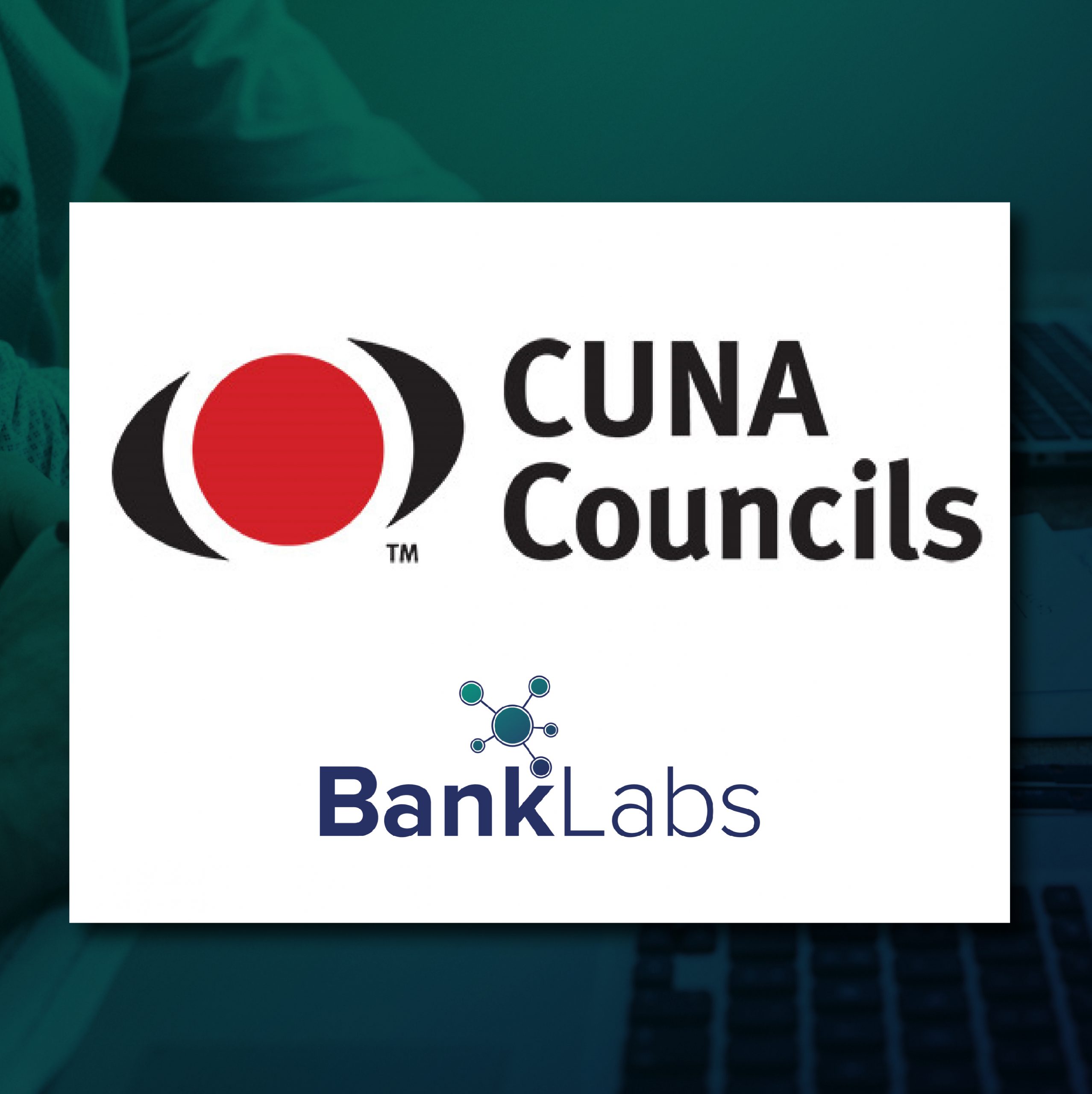 Traditional and alternative lenders play by different rules, but each have their own advantages. Check out @cunacouncils to find out what your #creditunion could learn from nonbank lenders and what they could be learning from you: http://www.cunacouncils.org/news/16201/news-article/ 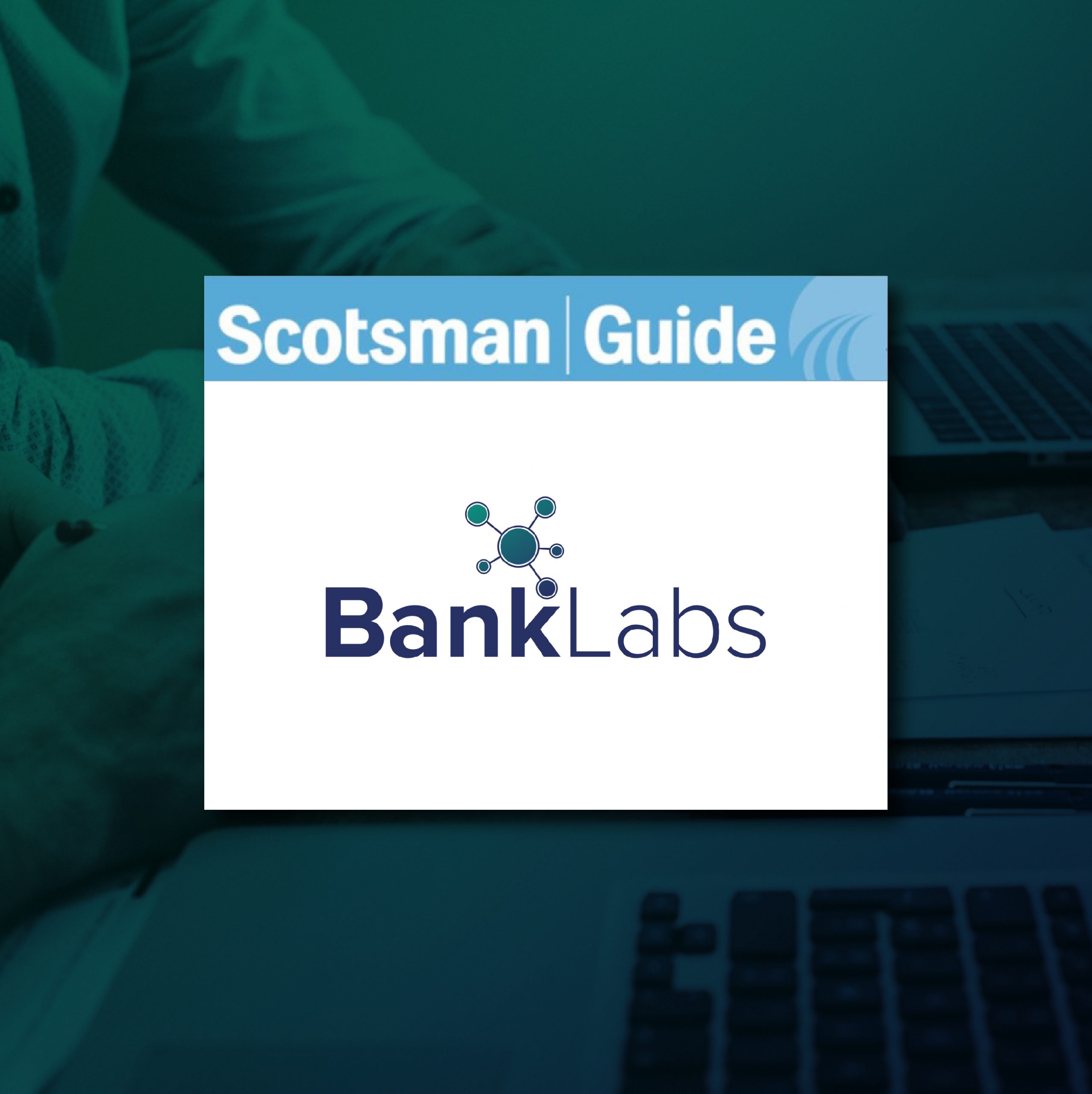 Scotsman Guide – Mobile Lending is the Next Wave

“Commercial mortgage companies that fail to implement mobile solutions also run the risk of losing step with their clients and falling behind their competitors” says our president Matt Johnner. Read more of what he has to say about mobile tools in lending in this month’s issue of Scotsman Guide:  https://www.scotsmanguide.com/Commercial/Articles/2019/07/Mobile-Lending-is-the-Next-Wave/ 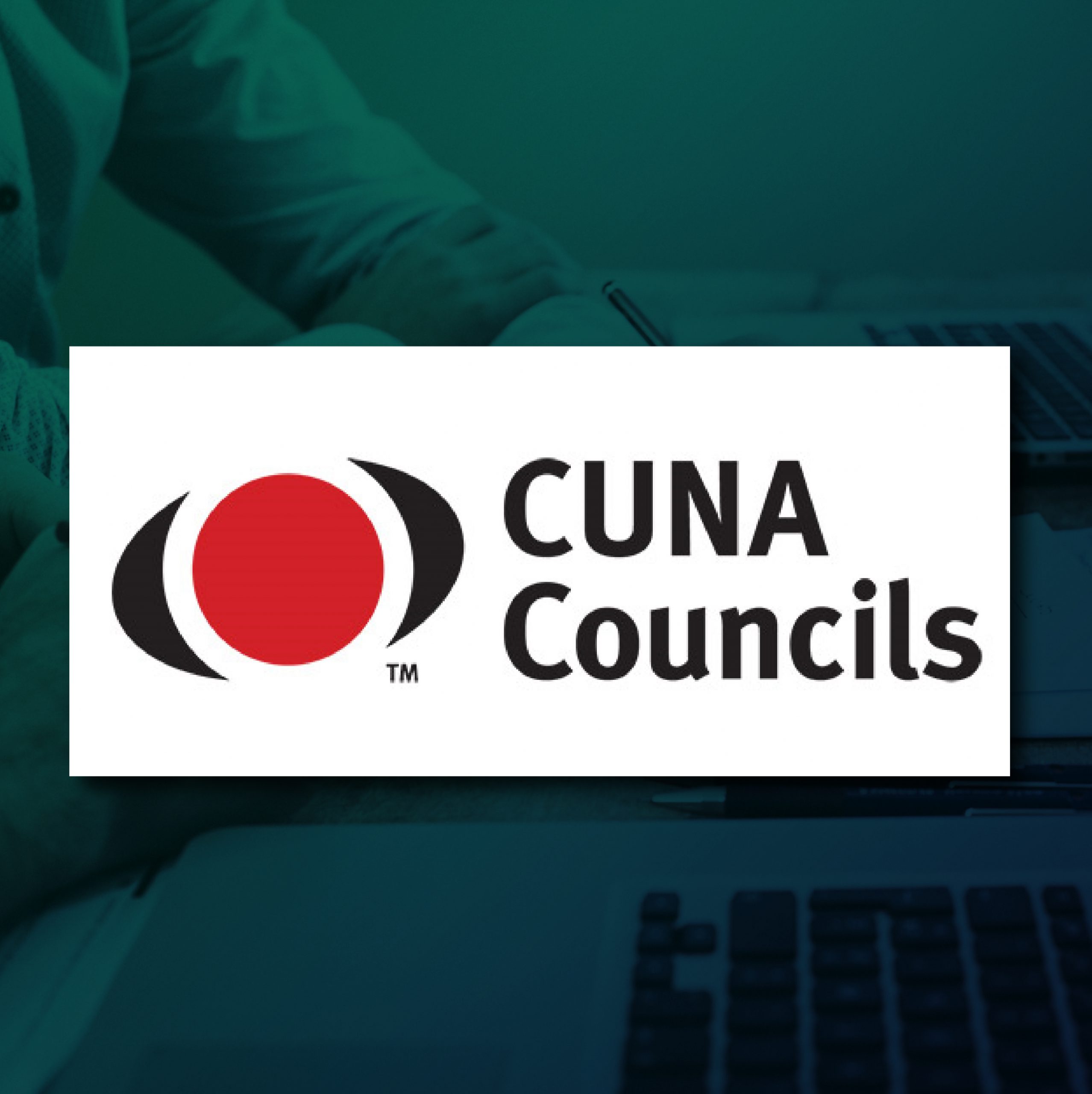 CUNA Council – Keeping Up with Consumers

How Credit Unions Can Create a Custom Strategy for Business Members. https://www.cunacouncils.org/news/15904/news-article/ 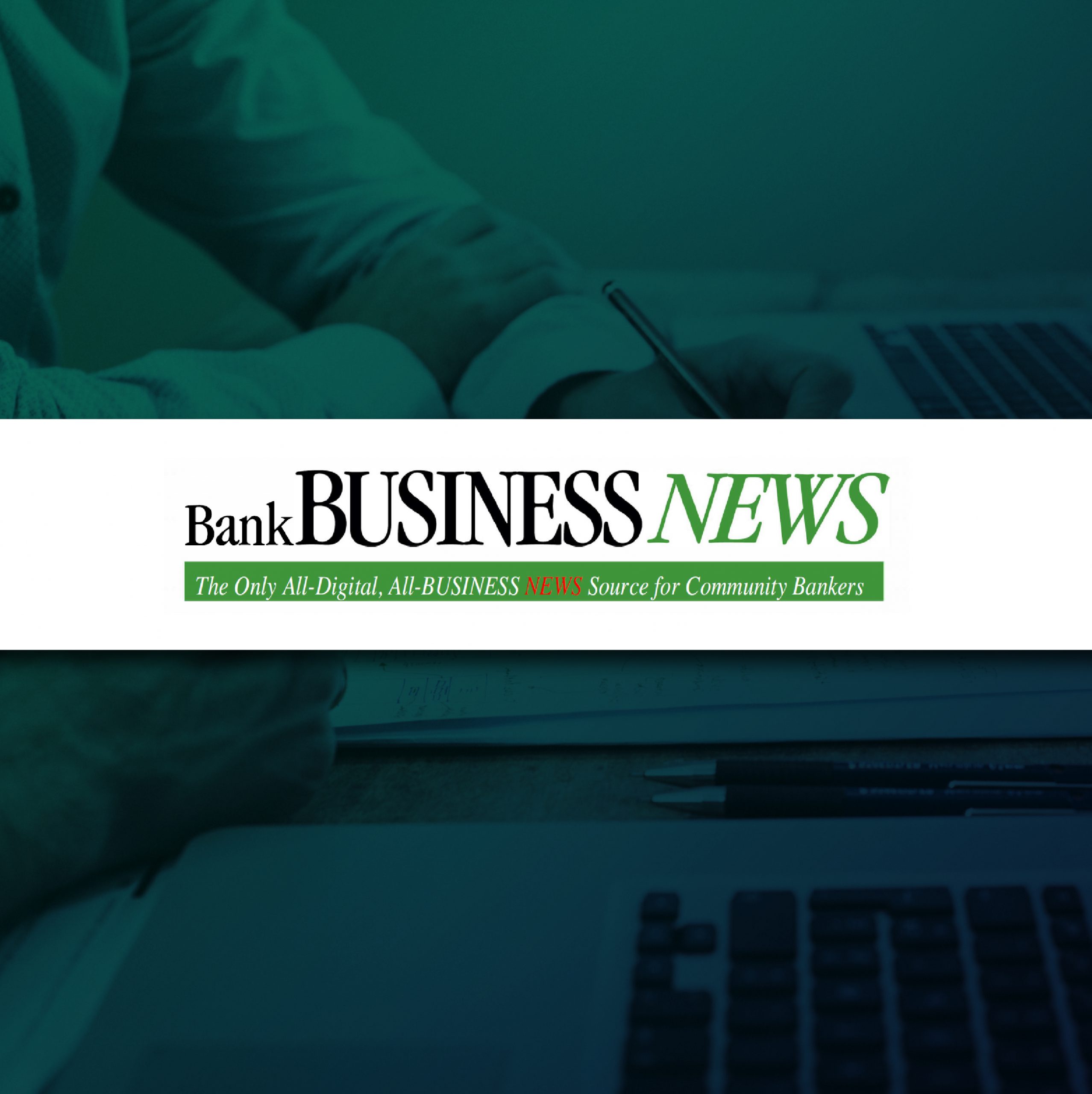 Relationships with business banking customers has become increasingly important over the last few years, especially with several competitors in the market. How is your FI taking your customer into consideration when providing digital solutions? The latest article in Bank Business by President and Co-founder of Bank Labs breaks down how to build a better relationship with business banking customers : https://www.bankbusiness.us/so-you-say-youre-a-relationship-banker/

Get ahead of the competition.

Demos of our products take only 30 minutes and we offer a free trial.